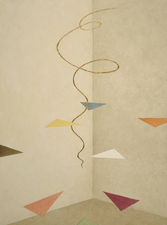 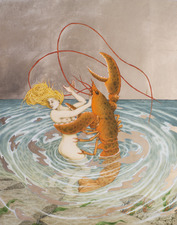 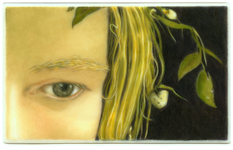 Lover's Eyes
Inspired by 18th century Georgian eye portraits which were often commissioned as gifts for secret lovers, I began this series with images of women’s eyes excerpted from paintings by men such as Victorine Meurent's eye in Manet’s Olympia. Wherever possible I've titled the paintings with the model’s name, reversing the gaze by giving primacy to that of the model looking out, rather than the gaze of the original artist’s eye. Lover’s Eyes II portrays the eyes of men by male artists from a 500 year span of art history. Lover’s Eyes III will explore the contrasting depictions of women’s eyes by Man Ray and Picasso. 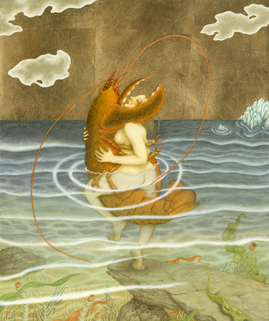 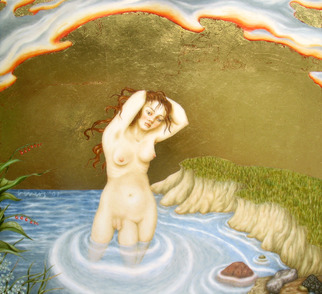 Eden
The Eden Series depicts a species struggling to adapt to a world out of balance. It began with a small doodle of Adam and Eve as a single-celled amoeba in a post-apocalyptic Garden of Eden. The impetus came from the confrontation over teaching the Theory of Evolution in schools. The amorphous creature that I drew was at once male and female: quite literally, flesh made one.

The sketch seemed to embody a more general schism in the U.S. between science and religion—a conflict that is played out in controversies ranging from stem cell research to gay marriage. Another underlying theme is the looming presence of global warming. Remorse draws on Masaccio’s Expulsion: Adam is expelled from a city in flames with his “tail” between his legs. In Mammæ a many-breasted figure arises from a barren landscape sprouting babies galore, a fertility figure at once cautionary and hopeful. The Eden Series continues to evolve. 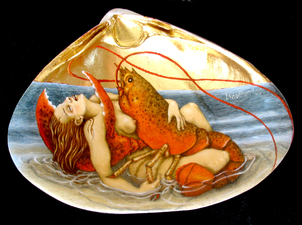 Shell Series
As a child, the beach was my playground, and I often collected and painted shells to display along the sidewalks of Provincetown’s East End. This series is both a nod to that time period and a flirtation with kitsch. I’ve often chosen to paint on unusual materials if they resonate with the ideas I’m working on, but with the Shell Series it was the other way around—the imagery grew out of the medium itself. Walking the tide line to collect the shells inspired imagined encounters between humans and the wild creatures of the deep. The contours of sea clam, scallop, quahog, mussel, and oyster shells provided a natural alcove for these metaphorical narratives. Later works in this series also reference Japanese erotic woodblock prints and kai-awase painted shells. 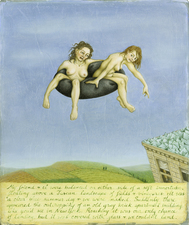 Flying Dreams
This series is based on flying dreams that I have collected from over two hundred people of all ages and walks of life. The very tangible sensation of over-coming gravity makes these dreams memorable to many people. Taking note of the almost universal gratitude expressed in the retelling of the dreams, the paintings are done as ex-votos (Mexican devotional paintings), giving thanks for the miracle of flight. They are painted on metal and include the description of the dream in the dreamer’s own words.
The variety of flying techniques and circumstances enthralled me and this work would not have been possible without the many people who shared these intimate experiences with me. I have tried to depict the scenes as actual events in keeping with the spirit of the dreams rather than trying to interpret them or fabricate a dream-like pastiche.